>>NGO>Östgruppen >Support Russian democrats!>Help us promote this cause!>
Back to activity

Help us promote this cause!

We can all help to spread this cause to more potential donors and participants. Use the digital tools below and help us increase visibility, reach a wider audience and maximize impact. Your cooperation can make a big difference!

One click + a small message makes your activity go viral in your social media channels. This gives it the visibility it deserves. Make sure you are active and respond to people’s comments.

Sharing your activity on Instagram, TikTok, Snapchat, Youtube, WhatsApp and other social media apps is a known good practice to reach success:

Use the short URL to your Target Aid page in your social media bio and posts.

Go ahead and create your image or video post using the activity’s main image. Don't forget to promote your activity by guiding the followers to the link.

Give visibility to your activity through an email towards the targeted audience of potential supporters.

Integrate widget on a webpage

More visibility can be achieved by integrating this customized widget on a web page. This drives more visits to your activity.

Russia is waging a war on Ukraine. It requires immediate support for Ukraine. But the long-term perspective must not be forgotten. A democratic Russia is a crucial factor in creating sustainable peace and security in Europe.Östgruppen has been working for almost two decades to support the increasingly vulnerable Russian democracy movement. They work in the face of fierce resistance and are subjected to extensive and brutal repression. Independent media are virtually banned, human rights defenders are extremely vulnerable and the political opposition is largely imprisoned or forced into exile.One important way to support the democracy and human rights movement is to strengthen their voices in Sweden and the EU - to disseminate their information and help them to promote their views. Another is to show our solidarity so that they understand that they don&#x27;t stand alone - that the world is on their side! Together we are stronger.This is what Östgruppen is doing! We cooperate with and support human rights defenders in Russia. We spread information about the situation. We shape public opinion and influence politicians in Sweden and the EU.Unfortunately this requires not only good will, but also financial resources. Your support is needed now more than ever! It is together with the good forces in Russia that we can bring about lasting change!&quot;It is more important than ever to support the Russian democratic society, which is why the work of Östgruppen is so important. Isolate Putin, not the Russian democracy movement!&quot;Lusine Djanyan, Pussy Riot, political refugee in Sweden from Russia&quot;Östgruppen shows that a small organisation can achieve a lot on a big and important issue.&quot;Global Bar Magazine, when awarding Östgruppen’s chair the titel &quot;Most Influential in the Debate on International Aid and Development&quot; in 2021
14 050 SEK14%
100 000 SEK
Donate
<div id="targetaid-widget-container-null" style="display:inline-block;"></div> <script type="text/javascript" id="targetaid-widget-script-null" data-widget-container-id="targetaid-widget-container-null" data-url="https://www.targetaid.com/ngo/ostgruppen/ostgruppen/stoed-rysslands-demokrater-1/widget?compact=False&supportProfileKey=" data-width="0" data-height="0" src="https://www.targetaid.com/scripts/widget.js"></script>
Or
1) Upload this image to your website
2) Add this link to the uploaded image at your website
Compact widget
Östgruppen

Let your own creativity loose and create your own promotional material including the QR-code linking to your Target Aid page.

Display an attractive poster (PNG, A4) in some physical room where potential supporters pass by. The integrated QR code allows people to reach the your Target Aid using their smartphones.

Print flyers (PNG, A6) to distribute in physical spaces and events where potential supporters pass by. The integrated QR code allows people to reach your Target Aid using their smartphones.

More visibility can be achieved by integrating these web banners on your web page and linking them to your Target Aid page. This drives more visits and potentially more donations. Format on the banners are: PNG, 728x90, 336x280, 300x250, 300x600. 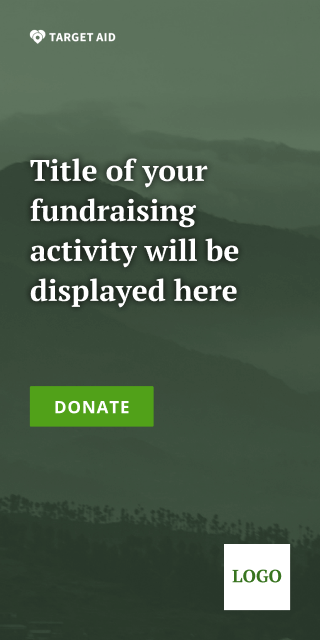 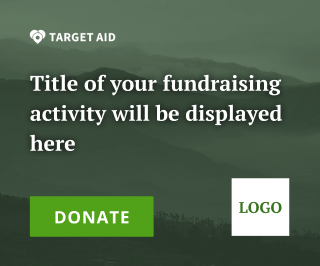 Do you have a company webpage? Integrate the customized widget or any of the provided web banners by copying the HTML code and adding it to the source code of the web page.

Place widget/banners where it can be easily seen and clicked on. It's advisable to use the HTML code rather than the picture + URL as it then will be linked in real-time.

The provided QR-code can be placed in both digital and printed marketing material you create and use to market your fundraiser.

By scanning the code potential donors reach your Target Aid page to read about and support your cause.

Use the QR-code in ads placed in digital channels, member magazines and newsletters or local newspapers.

Do you have any access to spaces and venues to market your fundraiser project in real life? Maybe you could place a poster or pin a flyer on the company noticeboard or hand them out at a conference?